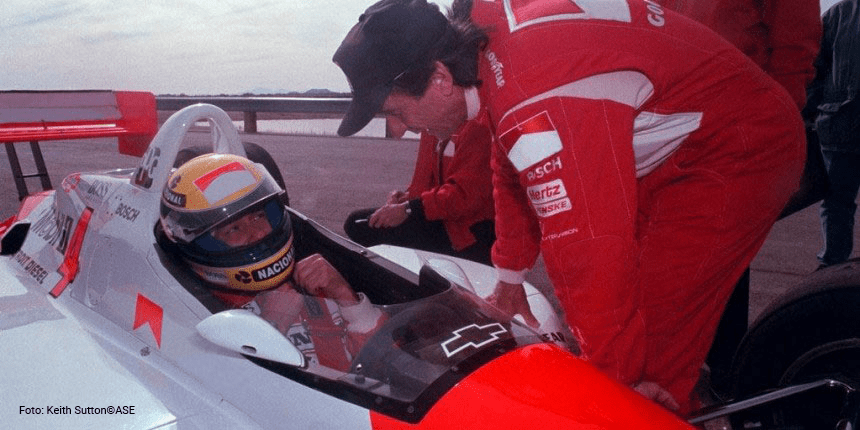 Unable to get the conditions he wanted to renew his contract for the 1993 F-1 season, Ayrton Senna used his down time at the end of 1992 to test an Indy Racing car, along with his friend Emerson Fittipaldi. At the time, Ayrton was worried with team McLaren’s coming engine-switch, leaving Honda motors behind to race with Ford ones, not to mention the way Williams was dominating the category, specially due to their cars’ highly advanced electronic controls. Actually thinking about taking a sabbatical year away from F-1, in 1993, Senna went to the USA, more specifically to a tiny track in the Arizona desert, close to Phoenix, for his first test in the category: the Firebird Raceway. On the difficult, narrow circuit, that “felt like a go-kart track”, as Fittipaldi himself described it, Senna took his first and only laps in an Indy car. It was a Penske PC21, with a turbo Chevrolet engine, with which the team raced the 1992 season. In an interview with reporter Silvia Vinhas, from Bandeirantes TV, who covered the test at Firebird, the already three-time F-1 champion said he was very happy for the opportunity to test an Indy Racing car. “The track was really slow and the car behaves in a very particular way, but the sensation, the feeling, is great. I’m very happy for finally being able to actually experience an Indy Racing car”, said Senna. “One day I’ll drive this car, it’s just a matter of time. I have to wait for the right moment to compete in the US”, he added. Emerson mentioned that “it was very special day” for him, sharing a car with Ayrton in a day of testing. According to the unofficial timing, Fittipaldi finished his best lap in 49’70”, while Senna was faster: 49’09”. As we all know, Senna ended up racing the 1993 season for McLaren. Many consider that year a master-class in auto-racing, that included several historic victories, like the ones at the Brazilian Grand Prix and the European Grand Prix, at Donnington Park, when he beat Alain Prost and Damon Hill, even driving a worse car than the Williams.