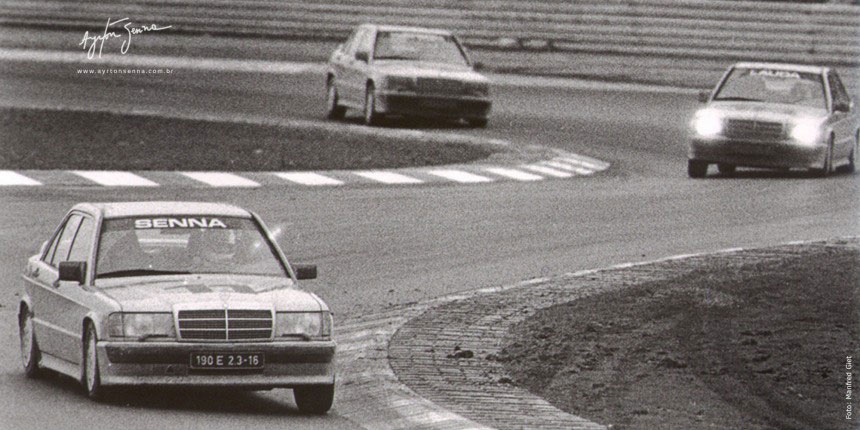 To celebrate the opening of Nürburgring’s new 5,148 meters track, next to the long and legendary Nordschleife configuration (with more than 20 kilometers), Mercedes-Benz invited several renowned drivers to drive their new 190 sedans in a celebratory race.

Some of the invited drivers couldn’t make it to the race, like Juan Manuel Fangio, already 72 at the time, and Emerson Fittipaldi and Mario Andretti, who were busy with their own careers, practicing for the Indy 500. Those drivers had to be replaced. And thanks to Senna good relationship with Mercedes, he was granted Fittipaldi’s spot.

The vast majority of the drivers saw the race as a big celebration, but to Senna it was the opportunity to show the world who he was, driving the same car as internationally renowned drivers. It could be his calling card to the Formula One world.

The race took place on May 12th, the weekend following San Marino’s Grand Prix, the fourth race in the 1984 F1 season. Senna was a Toleman driver at the time, and had already scored a point that year, in his second race, in South Africa.

It was at that event that Senna got to know Alain Prost, since Mercedes asked Prost if he could pick Senna up at the Frankfurt airport and give him a lift to the track. It was the first time both of them talked for hours.

“The first time I really met him, and talked to him was in ‘84. Mercedes organized an event, in Germany – we were going to have a little race, in Nürburgring, with a new Mercedes model, and a few F1 drivers and former drivers were invited. Someone from Mercedes asked if I could wait for Ayrton at the airport, since his flight was due to arrive 15 minutes after mine, and we only had one car to go to the track. It was the first time we talked. The chat lasted for around three hours. It was really nice. We got very close, since Ayrton didn’t know anyone there. He was Always next to me, during the first few days”, recalled Prost in na interview to “Top Gear” Magazine.

Prost took the race’s pole-position, ahead of Senna and Reutemann. More than 100 thousand people showed up at Nürburgring to watch the circuit’s reopening. After the first of 12 laps, under a light drizzle, Senna had already overtaken the Frenchman and distanced himself enough from the competition to avoid any further threat. The 24-year-old raced impeccably, and was joined at the podium by Nikki Lauda, who finished second (and who would eventually win the season) and Argentine Carlos Reutemann, in third.

After the race, John Surtees was so impressed with Senna’s talent that he told his former boss, Enzo Ferrari, that he was the driver they would have to hire.